Engaging sports fans who are locked out of venues

Are you not entertained?

The Colosseum in Rome, built in AD 72-80, was the largest amphitheater in the world at the time of its construction. Crowds flocked to the arena to watch gladiatorial conflict, battle reenactments, and animal hunts featuring wild and exotic creatures from the furthest reaches of the Roman empire.

Fast forward 2,000 years and the forms of entertainment on offer have changed—man-to-man fights to the death have been replaced by One Direction concerts, which, to be honest, are an even scarier prospect for some—but public spectacles are still a huge part of society.

Statistics show that 37.4 million people attended events in Europe in 2018 across a variety of settings. It’s big business, and big money—especially for those who can attract a sizable share of the fanbase. 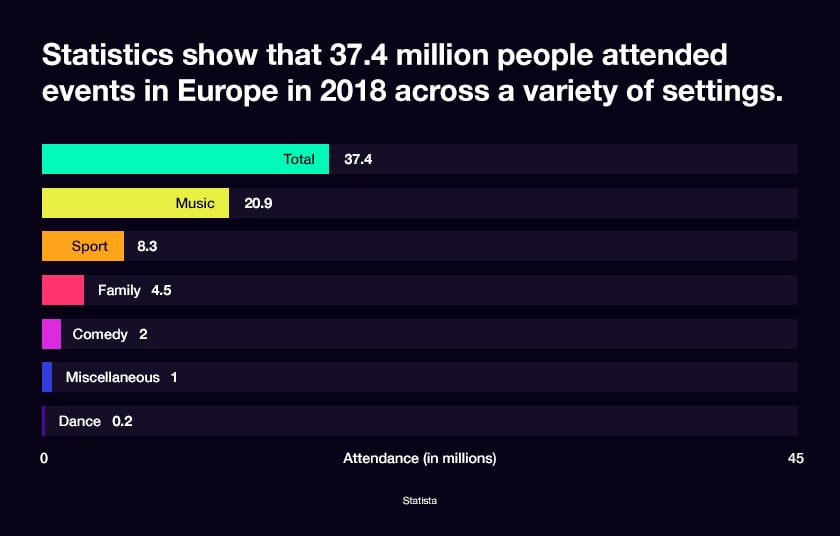 If you build it, they will come

Previously, promotional marketing activities would be focused on getting fans into the venue. Attendance was the number one priority.

Once on-site, there are numerous upsell opportunities to monetize those crowds. Buying a drink, grabbing a bite to eat, and picking up some merchandise is a tactic employed from football stadiums and basketball courts, to concert halls and movie theaters (and everywhere in between).

The on-site experience was everything.

For example, Tampa Bay Lightning, like many sporting teams, wanted to encourage fans to wear the team’s jerseys to games. Not only is it an important source of revenue, it also creates a fantastic atmosphere at the rink, and is likely to give home advantage (more about that shortly) and improve results.

Tampa Bay Lightning’s idea was to embed a radio-frequency identification (RFID) chip into the sleeve of all season ticket holders’ jerseys. Each fan that wears their jersey to a game automatically receives a discount in the club store and on all other retail stands. The fan feels rewarded for loyalty, is incentivized to spend more on-site, and the club generates more income.

The stadium also becomes a sea of team colours, which enhances the overall experience on the day and in turn leads to more season ticket sales.

So what happens when the public can no longer attend events? What are clubs doing to engage fans and make them feel part of the experience when they can’t attend in person?

The roar of the crowd is perceived to add a big home advantage. And the stats seem to back up this thinking. In the English Premier League, almost half of all games were won by home teams prior to matches being played without fans. Take fans out of the equation, and the percentage of away wins leaps from 27.7% to 61.5%. 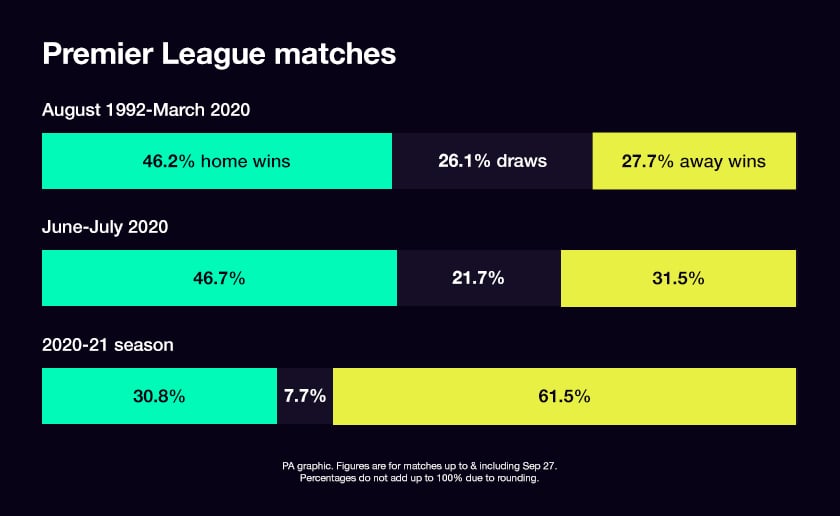 The interesting point about adding in crowd noise artificially is that it is purely for the audience’s benefit. The players in the stadium don’t hear it at all, so they have no benefits whatsoever. Which makes you wonder what makes fans happier: the fake cheering and chanting of a crowd that doesn’t exist but is added to give a superior viewing experience; or their team winning more home games?

This sporting equivalent of canned laughter isn’t to everyone’s liking, even though specialists from EA Sports have provided each club with 13 hours of crowd noise specific to their team. Indeed, many fans prefer to switch the crowd noise off, and enjoy the vocal interactions between players and tactical insights yelled from the coaching staff on the sideline.

Every goal scored or conceded, every win or defeat, is etched on the faces of fans. That’s why directors love to cut away to get supporters’ reactions at important moments of the game. The difference now is that the fans are sitting in their living rooms, not in the stands.

The emotion is just as real. And it’s still a shared experience. People still grab those nearest to them and jump for joy when their team scores. They still put their head in their hands and look at each other despairingly when it goes the other way.

But instead of one big scene, we see small microcosms of passion shown in multiple homes at the same time. It works, because that’s what’s so magical about sports. A common sensation and emotion that’s shared simultaneously by strangers near and far.

Social media has democratized communications. Everyone and anyone can have a voice. This isn’t always a good thing, but it works extremely well when it comes to sports.

That’s because sports is all about opinions. Sure, they’ll be biased, but they still count. And there’s a big group of people who would rather listen to the real fans giving their opinion than listen to an ex-pro from the 80s.

Fanzones are big news on YouTube, with the larger channels such as AFTV boasting over 1.25 million subscribers. Supporters of all clubs will happily pay to view content and listen to podcasts from normal people.

The clubs know this, and will often work with channels to share news, exclusive content, and special prizes. They’ll also copy trends and get inspiration for their own content. The Twitter feeds of big clubs is awash with snazzy videos, interviews, and memes to engage with its audience on a regular basis.

Every cup final there’s a story of a die-hard fan who has flown thousands of miles to be part of their team’s big day.

This is all sports fans now. We all watch from afar, hoping to one day make the journey back to the ground. And clubs are coming up with new ideas to keep supporters engaged and top of mind.

It’s something for all brands to consider, whether they operate in sports, finance, manufacturing, retail, or any other industry that’s been impacted by COVID-19.

Digital experiences have replaced physical ones. The technology is there to keep customers engaged and informed; brands just need to be creative and courageous in putting them to use.

Not all will work, and some may not be popular. But a rapid test and learn approach can enable agility to switch off the activities that are turning fans away.

And, at the end of the day (to coin a sporting cliché), it’s about remembering the importance of the relationship with paying supporters. Sometimes it’s about being there, sharing experiences, and showing that you care. Like any long-distance relationship, it’s about doing what you can in whatever way possible, and looking forward to the day when you are once again reunited.

Want to learn more about new ways to engage your audience? Download: Putting Your Audience First: The New Rules of Content Marketing for 2020 and Beyond